Each inductee has an incredible life story and we are proud to have them be a part of the McCombs Hall of Fame. We invite you to learn more about their successes and contributions through the videos below. 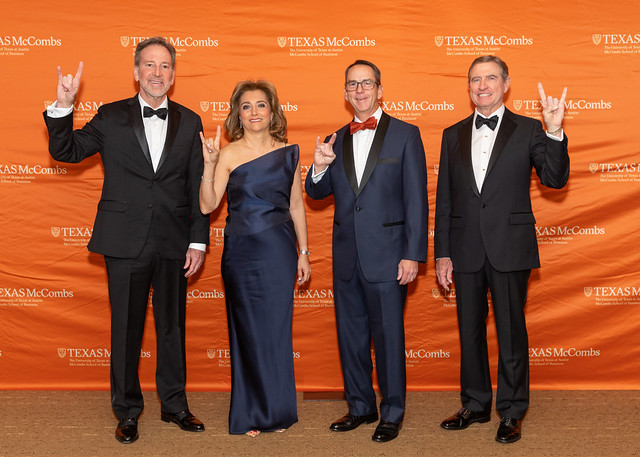 Phil joined GTCR in 1992 and is a managing director of the firm. Phil previously worked in the Corporate Finance department of Kidder, Peabody & Co. He holds an MBA from the University of Chicago and a BBA in finance with high honors from the Business Honors Program at The University of Texas at Austin.

Phil has served in many leadership positions during his years at GTCR, including heading the firm’s Technology, Media and Telecommunications Investment Team, chairing the firm’s Investment Committee, and serving as GTCR’s Managing Partner. Phil has played a leadership role in a number of past investments including AppNet, CellNet, DigitalNet, Rural Broadband Investments, Solera, Sorenson Communications, Transaction Network Services, and Zayo.

Phil is a member of the Polsky Center PE Council for the University of Chicago and also serves on the United States Olympic and Paralympic Foundation’s Trustee Council. At The University of Texas at Austin, the Business Honors Program at McCombs was renamed the Canfield Business Honors Program in recognition of a generous gift from Phil and his wife, Mary Beth. The university has recognized Phil as a Lifetime Leader and he serves on the McCombs School of Business Advisory Council. Mr. Garza is a 1989 OYTEX recipient, a 2005 DAA selection and past President of the TexasExes. Garza is a member of the Economic Advisory Council to the Bush Presidential Center, Director of Americas Society, member of the Council on Foreign Relations and COMEXI, the CFR’s Mexican counterpart. In 2010 the Ambassador was named an “Aguila Azteca,” the Mexican government’s highest honor bestowed upon a foreigner.

Mr. Garza was elected to the Texas Railroad Commission in 1998 and served as its Chairman through 2002, served as Texas Secretary of State, 1994–97, and Cameron County Judge, 1988–94. Garza earned a J.D. from Southern Methodist University School of Law in 1983 and named Distinguished Alum in 2002. Garza is married to Dr. Liz Atkinson Garza, a UT Austin graduate and TexasExes Life Member. Ambassador Kay Bailey Hutchison was sworn in as the permanent representative of the United States to the North Atlantic Treaty Organization (NATO) on August 15, 2017. From 1993–2013, she served as a U.S. Senator from Texas and was also elected to a Senate leadership position. Ambassador Hutchison gained extensive international experience and developed a deep understanding of NATO as a member of the Senate Armed Services Committee. She also served as chairman of the Military Construction Subcommittee and as a member of the Defense Subcommittee on the
Senate Appropriations Committee. She served two terms as chairman of the Board of Visitors of the U.S. Military Academy at West Point.

Prior to assuming her duties, Ambassador Hutchison was a prominent attorney at Bracewell, LLP, an established international law firm in Dallas. Ambassador Hutchison also served in the Texas House of Representatives, as the Texas State Treasurer, and as vice chairman of the U.S. National Transportation Safety Board. Niloufar Molavi leads PwC’s Global and U.S. Energy practice comprising of over 6,000 professionals serving global energy clients in the oil and gas industry. She is responsible for all client services – assurance, advisory, and tax.

Niloufar served on PwC’s leadership team as the firm’s chief diversity officer. In that role she oversaw the firm’s diversity strategy and all of its related programs and
initiatives. She led the U.S. energy tax and Houston federal tax practices. With 28 years of experience with PwC, Niloufar has served a wide range of energy companies both in the U.S. and abroad, advising clients on international and U.S. tax structuring, mergers, acquisitions, and potential public offerings.

Niloufar began her career with PwC in 1991 and was promoted to partner in 2001. She joined the firm’s U.S. leadership team in 2009. She earned her MPA with a concentration in taxation from The University of Texas at Austin. She serves on the Advisory Board of McCombs, Accounting Advisory Council at UT, and is on the board of Junior Achievement. She serves as the chair of the board of trustees of Awty International School and serves on the board of Central Houston. She is a licensed CPA in Texas and resides in Houston with her husband and two children. Marc Myers is president of Myers & Crow Company, Ltd., a Dallas-based commercial real estate development company. Prior to that time, Marc was president of the Dallas Industrial Division of Trammell Crow Company and a member of the Management Board. During his 48-year career, Marc was responsible for over 37 million square feet of office, retail, and industrial development with a value exceeding $2 billion.

After graduating from The University of Texas at Austin, Marc served as an infantry officer in the 71st Airborne Brigade of the U.S. Army Reserves. Marc is married to Jan Willoughby Myers (also a UT graduate), and has four grandchildren, including triplets. Dean Jay Hartzell also recognized the 2019 Rising Stars at the Hall of Fame celebration. The Rising Star Award, established in 2004-05, goes to young alumni who have experienced professional success and have shown exemplary service to the Texas McCombs Alumni Network. Congratulations to Kovid O. Gupta, Lance T. Loeffler, and Carlos A. Whitaker.